The “lapsed buyer” can be a perplexing segment for ecommerce marketers.

Unless you outright ask or they explicitly tell you, it’s anyone’s guess as to why a customer doesn’t return to make another purchase.

Winning this ambiguous group’s continued business is not a straightforward path, but it’s worth the effort. Numerous statistics pop up in blogs and infographics that reference the efficacy of investing in your current customers, and how they bring you more bang for your buck over trying to attract new ones.

Enticing customers to buy after a hiatus requires two things in general. One, distinguishing who exactly is a lapsed buyer and needs a nudge. And two, devising a retention plan to guide them back.

What is a Lapsed Purchaser?

In basic terms, a lapsed purchaser is a customer who does not buy from your brand after an anticipated period of time.

The most popular reason people don’t return to purchase, by a long shot at 68%, is because of poor customer service.

Many more scenarios give rise to the “lapsed” label. Maybe the product they previously ordered arrived damaged or looked cheap in person compared to online. Or, the consumer found a better price for the same or similar product elsewhere. They’re not ready to buy again. Something in their life changed (think death of a fur baby) and what you sell (pet products) is no longer pertinent.

Defining why someone walks away from you, even if temporarily, is one matter. The more complex job is dividing active customers from those on the brink of churning.

When Does a Customer Enter Lapsed Territory?

Consider the enormous space that is ecommerce. You have companies that sell wellness products like toothpaste or soap that are purchased on a regular basis. Merchants whose focus is high-end luxury products with a long lifespan are on the opposite end. Shops specializing in seasonal products are a whole other matter.

This all complicates the determination of when, exactly, a person crosses to the lapsed side.

It’s entirely possible for a merchant to manage numerous journeys based on product, depending on how far they want to go. One customer who last bought a month ago may be considered inactive, while another—who purchased a large-ticket item two months prior to that—is months out from reaching the threshold.

The key is identifying the typical buying cycle within your customer data, whether it’s across the brand or drilling down for specific products or product types.

This is the simplest way to do it:

A Micro-View of the Inactive Group

A general line in the sand designates whether a customer is active or in need of engagement. It also is the foundation for taking segmentation, and therefore target messaging, to the next level.

There’s potentially a lot of variability within your “dormant” group. It could contain customers who drop large sums of money once a year, as well as those who regularly purchase low-value items but have gone missing.

One avenue for making these distinctions is an RFM analysis, which provides deeper visibility into your customers’ shopping habits by analyzing how recently they made a purchase, how frequently they buy, and the monetary value of their spending.

There’s an entire science behind the rating system requiring resources that most companies don’t have.

These painstaking calculations are unnecessary if you have an email service provider that automatically creates customer lifecycle segmentation for you. As you can see, Omnisend does this by classifying email subscribers based on the RFM analysis.

“It’s a simple way to see our customers’ shopping or purchasing habits in one place, and it’s really helped us to be able to target different groups,” says Angèl Foster, co-owner of Island Olive Oil Company. “We’re competing with larger businesses, and this allows us to have that reach at the right time.”

How to Win Back the Inactive Customer

There are no hard and fast rules for convincing a shopper to return after they’ve been gone for a while. Ecommerce marketers succeed when combining a number of win-back strategies.

Automated emails meant to lure back the lapsed purchaser were among the highest-converting automated messages of 2020. With a click-through rate of 13%, they delivered a 21% conversion rate.

Timing is everything, and getting it right is fully dependent on pinpointing your customers’ average buying cycles. Once you have that, you can stage a retention plan. “We typically recommend at least a few messages—perhaps three—to give people time to decide to engage again and purchase,” Heck explains. “And putting a certain timeframe in between those messages will depend on the types of products they sell and how often they sell.”

Our experience shows that composing one message at a time is best. If you send one email and adjust any improper triggers before deploying the next communication in the series, you ultimately avoid potentially cumbersome rework.

The brand Eat Me Guilt Free has reaped rewards from its three-message customer reactivation series, aimed at generating sales of its healthy, protein-rich snacks. They see a staggering 74% conversion rate—that’s an overall 1,723% lift in revenue-per-email, in comparison to promotional campaigns.

Consider experimenting with split testing, as Eat Me Guilt Free does. Everyone who doesn’t make a purchase after 30 days receives a message. Thereafter, the second message is sent five days later to half of the group and 10 days later to the other half. The same split is applied to the final email.

Automations make it easy, too, to proactively prevent customers from even entering the lapsed domain.

“If you know that customers order every 75 days on average, maybe you start sending a little bit of a sales email 60 days after purchase to warm them up,” proposes digital marketing veteran Lucas Walker, founder and CEO of the Rolled Up Podcast Network. “And it could be something as simple as ‘Hey, are you running low?’”

Earlier we established that it’s impossible to specify reasons for inactivity unless the customer tells you. Why not take the initiative to find out?

Walker suggests providing customers an easy way to give their feedback, such as a simple survey that indicates their reasons for not making a repeat purchase. Use the results to adjust your automation flows. For example, you might delay contacting them if they indicate they’re not ready to repurchase.

“The last thing you want is somebody who has been a loyal customer to mark you as spam,” he says. “Don't forget that these are people who have given you money.”

Bazhad Trinos, who handles email marketing for Naked & Famous Denim, employs this approach. Lapsed customers of its Tate + Yoko store, which features high-end denim brands alongside the company’s own raw denim label, receive an email inquiring about their previous experience.

This first email in the three-part customer reactivation series “has absolutely nothing to do with trying to get your business again,” Trinos says. “In fact, it's been a good amount of time. You've had the product in your hands for a while—let us know what you think. And people respond to that. So I think it's just a good way to pique someone's interest and have that lifeline out there and say, ‘Hey, now we've got some communication going’.”

Asking for customer feedback is one route among a host of options. Many scenarios and ideas go into determining the composition of your customer re-engagement initiatives. Here are some things to consider:

Think about what your business is. Are you selling consumables? Are your products long-lasting? This goes back to the nuance issue. Let these elements guide your messaging. In the case of higher-ticket items, you might slide in an education piece about caring for the product, before transitioning to a sales promotion.

Suggest a subscription. Plant the idea that a subscription removes the hassle of remembering to reorder and can save money, assuming the product lends itself to such a model and you offer it.

Offer an incentive … or not. Sometimes it makes sense for a brand, other times it doesn’t. It’s probably not worthwhile to give away a discount to a one-time customer with a low average order value (AOV). But the ones with higher AOVs? A deal might be the right solution that doesn’t damage profits. 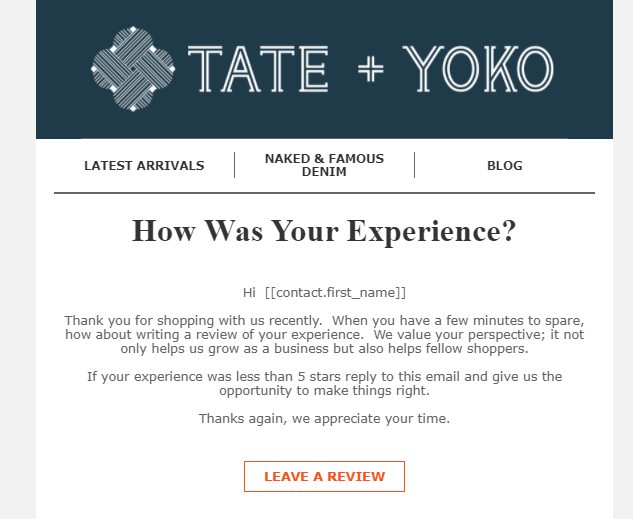 Once you’ve made some decisions, follow the golden rules of communicating with your customers: be clear, ensure each message has value, and relay their importance (read: you miss them and their absence is felt!).

Add SMS to the Mix

There’s power in texts, and we assume their importance will only grow with the iOS 15 update that’s set to kill open rates as a marketing metric.

Tread carefully when using SMS (short message service) messages to reach customers who have seemingly walked away from your brand. Blasting multiple texts could very well drive away someone who might be on the fence about you.

We advise a stand-alone approach, or fold one into an automated win-back series. Collectible pin company FigPin’s two-part lapsed purchaser series benefits from the combo approach. Step one is an email. Step two is an SMS a day later.

The SMS portion accounts for about 17% of sales tied to the workflow. Combined, the series generates a 22% conversion rate.

Cut Through Obstacles for Greater Retention

The land of lapsed purchasers is quite the jungle. A plethora of nuances makes for an intimidating trek to navigate.

Yet there’s a lot of potential if you invest in identifying lapsed purchasers. A platform that breaks this population into more precise segments saves you time and frustration. Such automatically generated lifecycle stages allow you to exert energy on automating lapsed-purchaser messages, the churn prevention efforts that need a human touch.