With the following Google Ads campaign experiment, we wanted to test whether changing the bidding strategy from ‘maximum conversion value’ to ‘target impression share’ would lead to a better campaign performance.

Impression share (IS) is the percentage of impressions that ads receive compared to the total number of impressions that ads could get. By increasing IS, we were expecting to reach and target a higher number of new potential customers by showing our clients' ads more frequently and in higher positions on Google’s search engine results page (SERP).

The bid strategy of the base campaign was set to maximum conversion value with a return on ad spend (ROAS) target of 400%.

For the experiment, we changed the bid strategy of our trial campaign to target impression share with an IS target of 90%, and a maximum cost per click (CPC) bid limit of £1.90. No other changes were made.

Experiment synchronisation was switched ON so that any changes to ad groups, ads and keywords of the base campaign would synchronise and apply to the trial campaign over the course of the experiment. We used a budget/traffic split of 50% and let the experiment run for 34 days between September 7 and October 10, 2022.

Bidding Strategy: Base vs. Trial Campaign

The trial campaign had a 82% higher CPC than the base campaign. 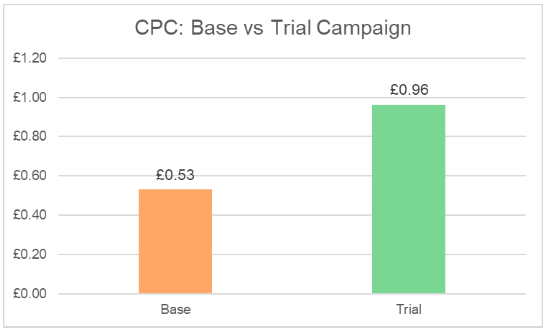 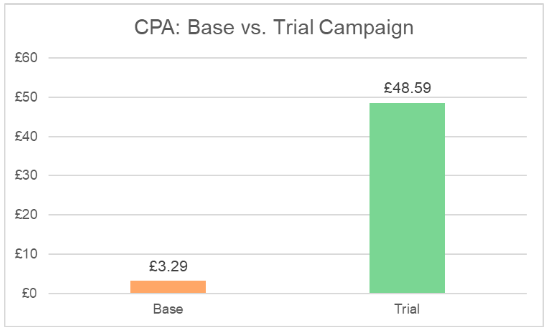 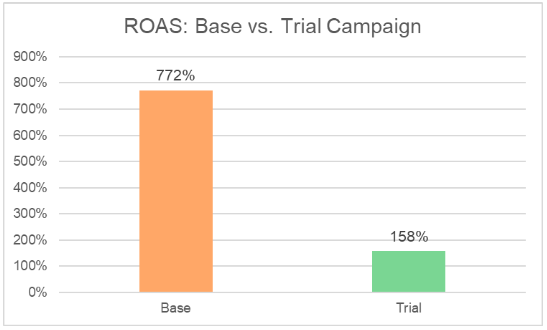 Heading over to the auction insights, we expected to see an increase in IS for our trial campaign. The auction insights of the base campaign revealed that our client had an IS below 10% against competitor 1 (34%), competitor 2 (20%) and competitor 3 (17%). Running the experiment with an IS target of 90% and a maximum CPC bid limit of £1.90 resulted in an IS of 32%, putting our client ahead of Competitor 1 (17%) and Competitor 2 and 3, both of which had an IS below 10%. With the trial campaign our ‘top of page’ rate increased from 56% to 89%. 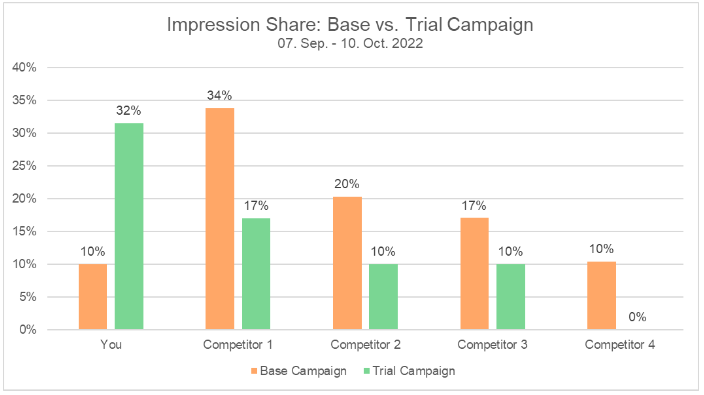 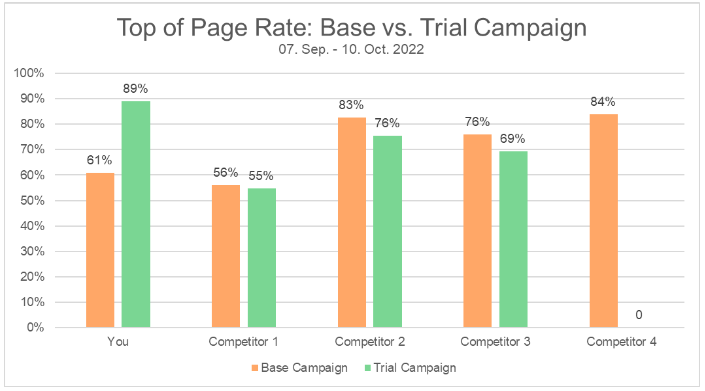 While the maximum conversion value bid strategy is designed to bring in conversions that will give us the highest return, target impression share intends to achieve the IS goal we set for our campaigns.

Improving IS and positioning ads more frequently on the search results page increases the chances of reaching more people who could possibly become customers. Even if these may not deliver revenue efficiently from a ROAS perspective, acquiring new customers can certainly benefit a business's long-term strategy. Once people become customers they are more likely to return and purchase again, generating more revenue over time. However, as the IS bidding strategy focuses on awareness and reach, and isn’t intended to target only those people who are most likely to convert on each ad click, it is to be expected that we’ll lower ROAS and higher CPAs for IS-focused campaigns.

With the trial campaign we wanted our client ads to show 90% of the times when our ads were eligible to show at a maximum CPC bid limit of £1.90. We were able to increase the impression share from below 10% on our base campaign to over 30% on our trial campaign.

While we didn’t reach the goal of a 90% IS, we were still able to put our client ahead of Competitor 1. By removing the bid cap, we would most likely have seen a stronger IS performance. However, this would’ve also led to even higher CPAs. With a long-term strategy, a higher bid cap is preferable, while campaigns are optimised over time to achieve efficient performance.

In the end, choosing the right bidding strategy for your campaigns depends on your goals.

For when you want to reach out to and target a higher number of prospects, you might want to opt for an IS target bidding strategy. Setting realistic maximum bid limits and impression share goals will help you rank ads higher and more frequently on Google’s search results page and thus boost your ads’ visibility.

For when you want to target only those potential customers that are most likely to bring in the conversions that will give you the highest return, you want to choose a maximum conversion value bidding strategy, setting your desired target ROAS.

If you’d like to speak with one of our team about how we can help maximise your returns from your PPC campaigns, get in touch and we can have a chat about your strategy and goals.