As an ecommerce agency based in the UK, we have gone through four Chancellors, three Home Secretaries, three Prime Ministers, and two Monarchs, all in less time than it would take to build a bespoke theme on Shopify.

It sometimes feels like Britain has embraced the looming economic uncertainty as a challenge in which the first country to enter a recession wins the gold medal at the United Nations Christmas Party.

A global recession of some kind seems inevitable, although the severity of the impact on the direct-to-consumer market is yet to be fully realised. Growth has slowed, but it’s important to remember that it has slowed compared to the biggest growth curve the industry has ever seen. In reality, what seems to be happening is that ecommerce growth is returning to the levels we saw pre-pandemic. 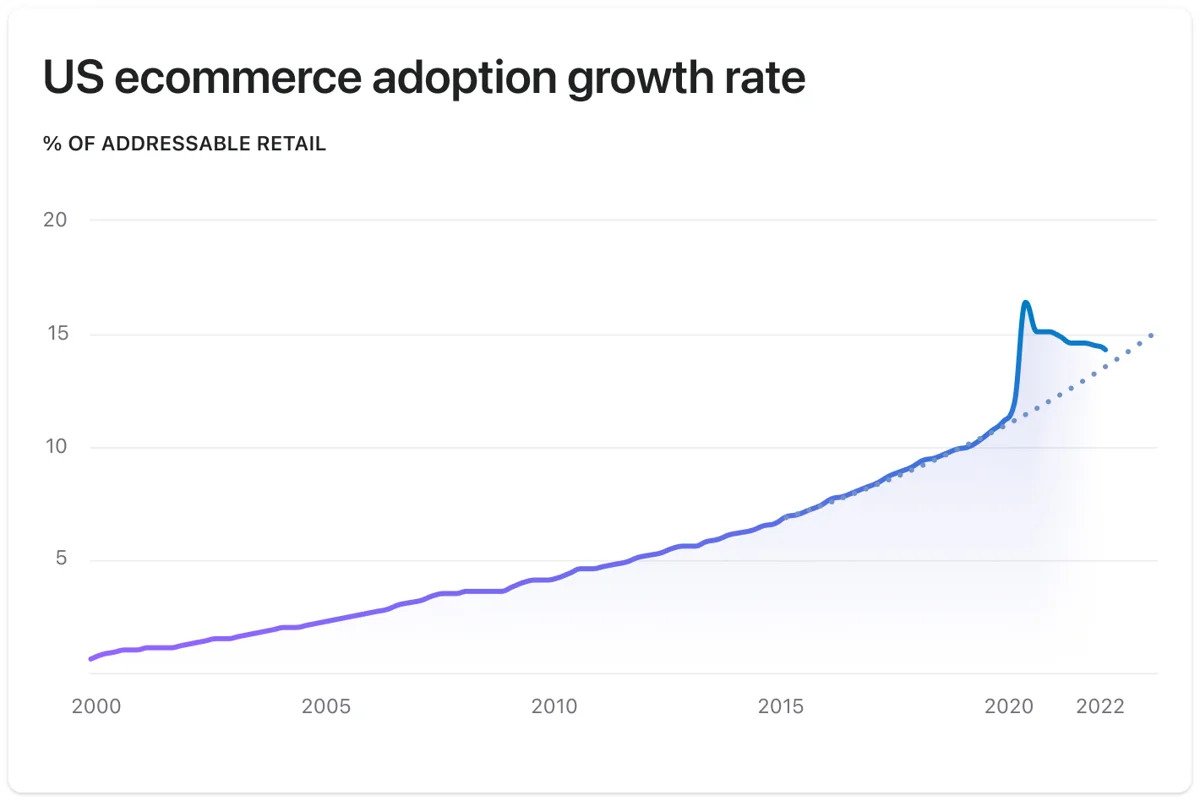 Where we previously saw the growth curve outstripping traditional retail, we are now seeing growth patterns across traditional and D2C converging.

Although the pound taking a tumble is concerning for the UK markets in general, there is a silver lining. Not since 1776 has the US had the opportunity to take advantage of the British government’s proclivity for making bad decisions.

Typically speaking, the cost of a US direct-to-consumer business hiring a UK agency may have been prohibitive. Even though ecommerce agencies based in the US are generally more expensive resources, historically, the dollar-to-pound exchange rate would even things out. In the short term, that’s not the case. With the pound floating almost in line with the dollar, US businesses can enjoy the benefit of cheaper costs in the UK market, and even when converting GBP to USD, they will still come up Trump(s).

If cost is no longer a factor, what are the other barriers to a business based in the USA hiring a UK-based agency?

Time is the obvious one. At its worst, a UK-based ecommerce agency is a full working day ahead of an ecommerce business based on the west coast. This presents some key challenges in terms of connecting with clients. Businesses based on the east coast of the United States will have a much easier time of things when dealing with a UK-based agency, but regardless of the time difference, it’s not all negative. There are some benefits.

If you can find an agency that is able to flex to find the sweet spots to connect with you (towards the end of their working day but at the beginning of yours), you have the benefit of a team of ecommerce experts working while you are sleeping. You are then able to feedback during their downtime meaning you can create an almost ideal feedback and execution cycle that allows you to continuously deliver work while avoiding the frustrating issues of working hours being wasted by awaiting feedback from either party.

The above is only really a requirement for iterative or retainer work where feedback requirements are a consistent requirement and potentially on a day-by-day basis.

For project-based work (for example a website migration from Magento to Shopify Plus), where feedback mechanisms are pre-planned and more prescriptive in their nature, it’s simply a case of ensuring those meetings can happen at a time that works for both parties.

Another thing to consider is the edge cases i.e. what happens if we really need something out of normal operating hours? There is no easy answer to this. Most agencies will have processes set up to fix critical issues out of hours and we are no exception to that, however, critical issues happen far less frequently than you might expect. This is especially true of brands on a tech stack with Shopify at its core. Generally speaking, if your Shopify site is down, so is everyone's and the issue can't be solved by your agency and has to be dealt with by Shopify directly. This is, thankfully, an extremely rare occurrence.

When there is an agency-caused issue (yes, it does happen), you should have certain safeguards in place, especially when it comes to pushing development changes live. Wherever possible, we don’t push changes live when it won’t be possible for those changes to be closely monitored. That means not pushing live just before we clock off for the day or prior to the weekend. This is another benefit of having a business working for you in another time zone. It means they are delivering improvements and development changes outside of your peak trading hours, and monitoring and testing those changes while most of your customers are sleeping. For large sites, early morning go live and testing is the norm, but you get to do that without having to wake up at an ungodly hour.

Finally, we should talk about internationalisation. Cross-border selling is becoming more and more popular, and one of the big benefits of ecommerce is that consumers have access to products around the world at the click of a button. Many brands already see significant traffic and revenue from international users, but true internationalisation requires more than just a currency conversion.

Even translation alone is not enough. Localisation of content to match the culture and expected experiences of each local market is vital to success.

Many US-based businesses view Europe or EMEA as a single entity and will often talk about entering the region with a single strategy. This just isn’t viable. The nuances in purchasing behaviour and customer expectations are vast on a country by country basis, so having a team at your disposal that understands the technical and logistical challenges of internationalisation is not optional - it’s a requirement.

The UK can be a springboard for US-based ecommerce businesses. Not only will the time zone support your efforts to cross borders into mainland Europe, the experience of a diverse UK-based team means your returns are significantly better than they would have been otherwise.

As an agency, we have worked across marketing, website development and creative for a whole host of US-based Shopify merchants, and the results have always been phenomenal, despite some of the challenges referenced in this article.

If you’re looking to take advantage of the benefits of working with a UK-based agency, get in touch.